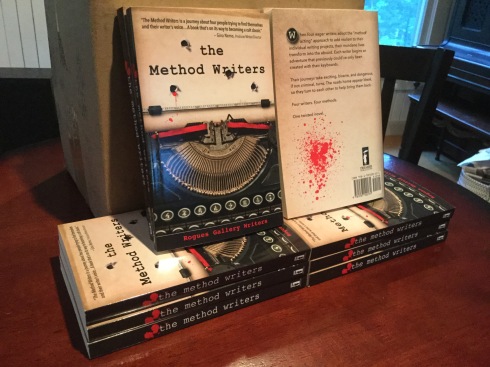 Author Jeff Swesky primarily writes literary fiction where the characters balance a razor sharp line between redemption and destruction. Jeff is a member of the Rogues Gallery Writers, who published a short story collaboration, "Writing Is Easy," and a group novel, "The Method Writers." He also ghostwrote the Holocaust memoir of Rabbi Samuel Cywiak titled, "Flight From Fear," and released a collection of his short stories titled, "Fell on Black Days." He's currently working on several projects, including his literary, coming-of-age novel, "Such a Dreamer," and the crime noir serial, "The Awakening of Kenny Black." END_OF_DOCUMENT_TOKEN_TO_BE_REPLACED
This entry was posted on Thursday, July 7th, 2016 at 8:03 am and tagged with book launch, Bridget Callaghan, fiction, group novel, Jeff Swesky, Michael Ray King, Nancy Quatrano, paperback release, publication, release date, Rogues Gallery Writers, The Method Writers and posted in Announcement, Rogue Events. You can follow any responses to this entry through the RSS 2.0 feed.
« Pre-Release Goodreads Giveaway
“Little Free Library” Release Week Giveaways »